I didn't have time to implement the crappy tutorial in-game, so here it is in Itch: 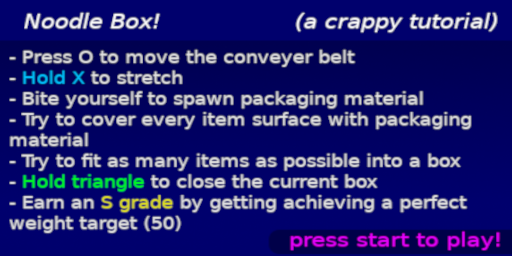 Note: This is my first time trying to make a PSP game, and I only had a PSPgo on hand. It works on that, but idk if it'll work on any other models.

This is a Puzzle (almost-)game that plays like a mix between Snake and Tetris.

Here's some back story that I didn't have time to put in the actual game:

costs are too high, and he's been ordered to reduce costs or be fired!

Desperate (and broke), he asks his chief engineer to come up with a creative solution.

To save money, the engineer gets the idea to leverage automation by building robots!

Since he couldn't afford to buy new electronics, he had to improvise by dismantling an

old game console he had lying around.

He managed to build a robot worm that can magically generate packing materials. This

saves time and money! Unfortunately, since it was based on an old game console, there

is a weird glitch where, if an entire row of material is lined up, it will mysteriously

This damages the goods, but it does allow more efficient packing and lower costs.

The jam had great projects, but this game is my favorite of this jam, it's so much fun 🤝

Haha, the snake is a very unique concept I must say. I understood the game after reading the instructions though. The 3d elements are very distinctive and cool. I’d appreciate it if you could share your source code and some details about the implementation process :)

Thanks, and yeah I'm actually working on releasing some of the tech I used to build this since it actually turned out way better than I expected. Most of the engine stuff was pulled from some of my other projects, so untangling those dependencies will take a bit of extra work, but I'll post it on the discord when it's ready. 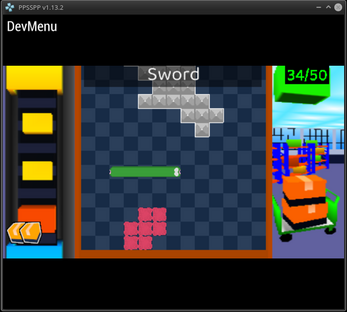 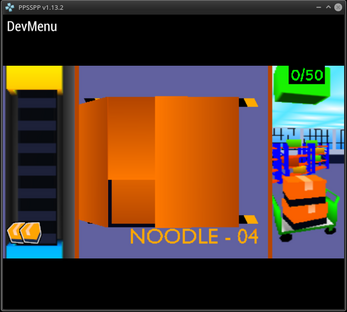